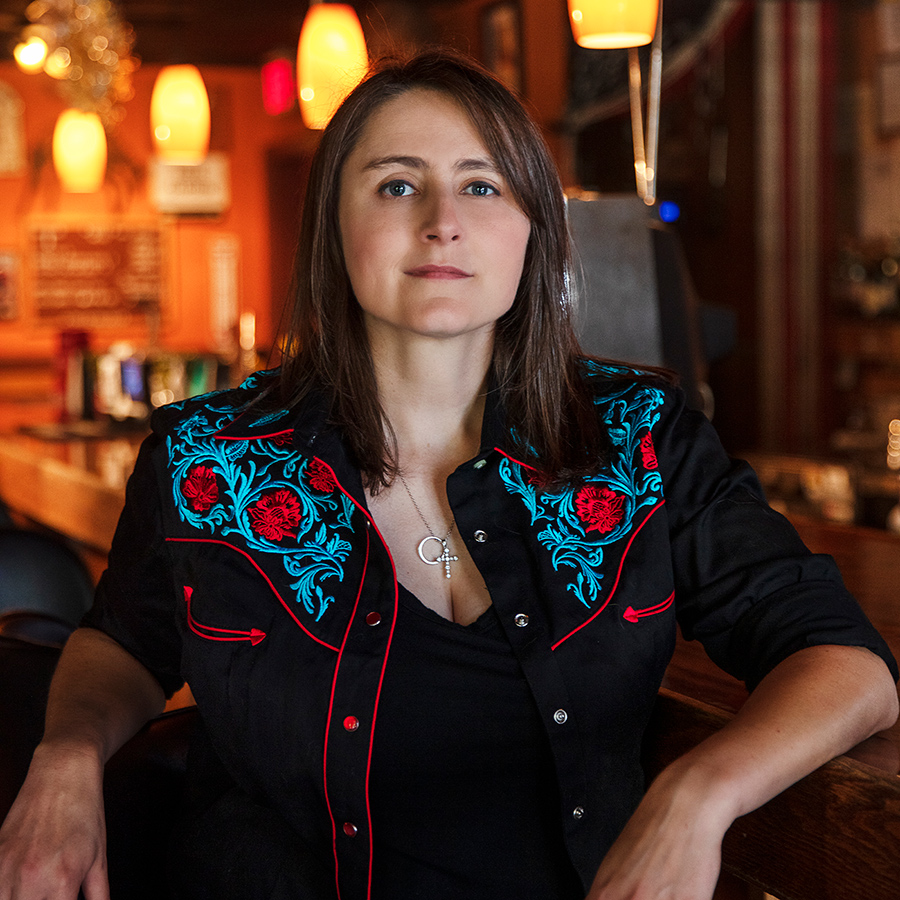 “One of the best things about country music was that it was adult music,” Erin Enderlin says. “It was real music that dealt with hard issues in life so that people going through those things don’t feel so alone.”

The observation is signature Enderlin: She has a way of turning a song or even just a thought into an outstretched hand to the lonely or ashamed. Her new album, Faulkner County, channels that empathy into a 14-part collection of story songs that sound like confessions, conversations, and declarations, confided or professed in late-night, smoky corners and red-eyed, hazy dawns.

While she first turned heads as a godsend to those aching for an artist with some golden-era country backbone, Enderlin’s acclaimed 2017 record Whiskeytown Crier firmly cemented her as something even more: a literary songwriter and superb vocal stylist with a knack for sharply drawn––and often sad––characters. Backsliders, avengers, lovers, and victims––they’re all swapping forlorn tales on the collection, which is a fresh take on the concept album set in a small Southern town. Faulkner County proves there’s more––so much more––where that came from.

The release of Faulkner County will cap off a landmark year for Enderlin. Already a go-to writer for stars looking for heavyweight country with classic panache––Alan Jackson’s “Monday Morning Church,” Lee Ann Womack’s “Last Call,” Luke Bryan’s “You Don’t Know Jack,” and a host of other songs for Randy Travis, Joey+Rory, and more are all Enderlin-penned––her own musical heroes have begun turning to her for songs. Reba McEntire, Terri Clark, Rodney Crowell, Whisperin ’Bill Anderson, and Rhonda Vincent all recorded Enderlin-penned gems over the last two years. As her 2019 four-part EP series reimagined the possibilities of narrative arcs in music, she embarked on a touring schedule more than 100-dates strong. Enderlin was a featured act on Jamey Johnson’s SiriusXM Outlaw Country Tour, AmericanaFest and CMA Fest, and crossed the Atlantic for her first UK run. In June, she took home three Arkansas Country Music Awards including Female Vocalist of the Year and Songwriter of the Year. Shortly thereafter, her song “I Can Be Your Whiskey,” was featured in Rolling Stone’s “10 Best Country Songs To Hear Now.”

The flurry of activity––especially from classic country giants who are still standing–– thrills Enderlin. “I can’t believe I got that Reba cut––it’s a lifelong dream,” she says. “It’s kind of ridiculous. Sometimes I just think, ‘Are there more five-year-olds thinking, I want to play the Opry and I want Reba to sing my songs!’ And then it happens?” She laughs, still high from the win.

As a writer, Enderlin favors the first-person perspective. Her story songs are vehicles for different women, speaking their truths, thereby creating a tapestry of female experience that is nuanced and complex––like real experiences are. “I don’t really try to wrap it up in a nice little ‘moral of the story’ so that everyone can feel warm and happy at the end of it,” Enderlin says. “Sometimes it’s just a piece of time and a real emotion––a real situation that people go through. Sometimes it’s raw. Sometimes it’s complicated.” Enderlin pauses, as if considering whether or not to continue. “I think that’s something that is missing from country music right now.”

Faulkner County rights that wrong. Jim “Moose” Brown and Jamey Johnson produced a dozen of the album’s tracks, while Alex Kline stepped in to helm boards for the remaining two. With yearning fiddles, album opener “I Can be Your Whiskey” explores the urge to soothe a could-be lover’s pain. Casting judgment aside, “Whatever Gets You Through the Night” chronicles comforts. Dylan Carmichael supplies out-front harmonies, and the result is commiserating, twinning vocals, more of a duet than a solo. “I was looking for a certain kind of guy’s voice,” Enderlin says. “I wanted it to seem like the people were having the same conversation, but they weren’t in the same room. I wanted that harmony to stick out.”

With saloon-worthy piano and a short story’s worth of lyrical detail, standout track “Queen of Marina del Rey” swaggers through its protagonist’s boozy, campy memories. “Tonight I Don’t Give a Damn” finds a woman settling for forbidden companionship and brown liquor in a dive bar. It’s one more example of Enderlin’s stealthy ability to make listeners pity instead of condemn. “I tend to gravitate toward the first person,” she says. “Sometimes there are stories that you can’t do that with, but there is a certain grittiness when you can––when you can take the character on and speak for them.”

Featuring harmonies from superb crooner Ronnie Bowman and production help from Kline, “Use Me Again”––written by Curly Putman, Dale Dodson, and Billy Lawson––captures lovesick complicity with heartbreaking clarity. “Broken” is a sorrowful anchor. A first-person look at abuse’s lifetime of reverberations, the song introduces a woman living with choices made––both her own and that of those around her. “Hell Coming Down” decries the predictable misery that follows temporarily muting a heartache. One of four tracks that Enderlin didn’t write, “A Man With 18 Wheels”––penned by Leslie Satcher and Bobby Carmichael––is an ode to loving a traveling man. Other covers include the sublime “Old Flames (Can’t Hold a Candle to You),” written by Pebe Sebert and Hugh Moffat, and album highlight “Sweet Emmylou,” penned by Rory Feek and Catherine Britt. Featuring harmonies from Vince Gill and Alison Krauss, the latter track is an ode not only to Emmylou Harris, but to the sad songs that offer steadfast shelter, heartbreak after heartbreak. “I enjoyed doing some songs I didn’t write,” Enderlin says. “It brings out a different part of who you are as an artist and a singer when you can connect with somebody else’s creativity.”

With harmonies from Terri Clark, “Hometown Jersey” captures the loyalty of the community who knew and loved you first. “Run Baby Run” soars with carpe-diem passion. Kicking off with pedal steel, breathtaking “Till It’s Gone” sits with a woman haunted by memories in a seedy motel room. The mourning steel serves as a second narrator, crying between Enderlin’s poignant vignettes. “I don’t think you can have too much pedal steel,” she says. “If someone says you can, you probably need to get rid of that person because you don’t need that kind of negativity in your life.”

A Kline-produced full-band version of Enderlin’s beloved 2018 acoustic single “These Boots” gives listeners rare insight into the woman behind the stories. A storyteller first who typically prefers characters to autobiographical inspiration, Enderlin opens up about her own life in the song. “I feel like it’s something everybody can relate to,” she says of “These Boots.” “Everybody has dreams. Everybody has something they’re passionate about in their journey.”

The songs on Faulkner County would stand alone as winning modern takes on traditional honky tonk, but together, they create a major accomplishment in musicianship and storytelling. “I hope listeners get lost in it,” Enderlin says. “I hope they get so into these characters that it’s like reading a favorite book––you’re there in that story, and you forget whatever is going on in your life.”